It’s accurate to say that I have been obsessed with dog sledding for a number of years. Though I have to admit my obsession only went as far as watching “Iditarod: Toughest Race on Earth” on the Discovery Channel. When I found out that there is a sled dog race right outside of Missoula every year, I knew I had to mush my way over there to start my career! I hope it’s easier then learning rodeo. 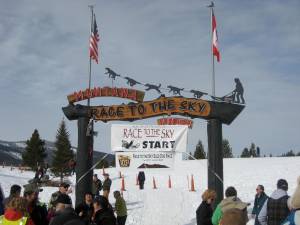 The Race to the Sky dog sled race is a 350 mile trek through the wilderness of Montana. I know what you’re thinking, 350 miles is piddly-squat compared to the 1012 miles the Iditarod mushers go every year – you weren’t thinking that? Well, I was until I went on a 3.8 mile ride that took over an hour and almost killed me.

After we watched the real sledders take off, we signed up to have a sled dog ride, but what we didn’t realize was that we (Matt) would be driving the sled ourselves. I opted to just sit there in the basket and look pretty – Blue girl had to stay in the car, awww. I guess herding a team of sled dogs like they are cows is frowned upon. 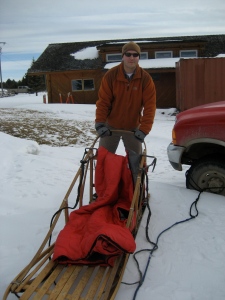 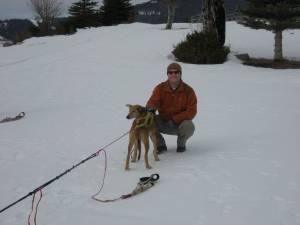 Matt holding the lead dog (a bitch!) waiting for the rest of our team 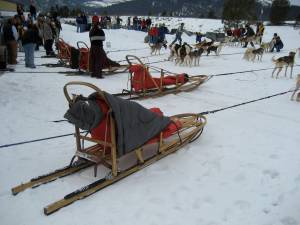 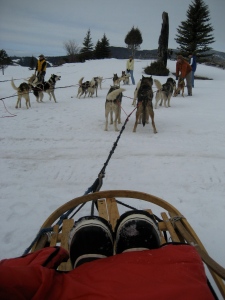 I'm all tucked in ready to fly 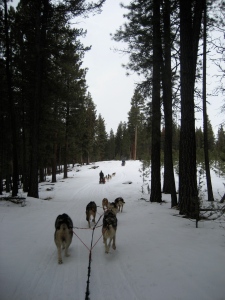 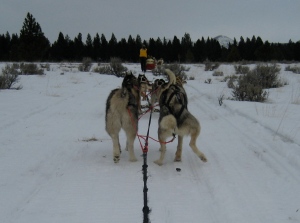 They train the dogs to poop while they run, I shit you not!

We were the last team in the group of 6 sleds, and were mysteriously stopped for 15 minutes not knowing what was going on. One of the guides finally came running back to tell us that two of the dogs a few teams up had stated mating while they were running and were “attached.” It was Valentine’s Day so I couldn’t blame them, but I guess in that situation you just have to let nature run its course. There was another pause a couple miles in when one of the teams chased a rabbit off the trail, but the wooden sled and a couple tourists hanging off the back stopped them by dragging their bodies through the woods.

Our team really found the groove on about miles 3.5 and then the wheels came off the bus, or err, dog sled. We were flying around an s curve, and come to find out the dogs will take the shortest route which is usually right next to a tree or any obstacle on the course – jerks. I have had a few scary visions in my life, but having our sled tip over and sliding on my side watching a tree come at my head at 10 miles per hour may win. But alas, at the last moment I did a front handspring out of the sled and landed safe and sound in a soft pile of snow – or at least that’s how I remember it. What actually happened was I slip out on the slippery sleeping bag at the last second, our sled hit the tree and Matt let go of the sled after trying to break like my life depended on it.

Luckily, the cute Carhart wearing chick guide in the sled in front of us sensed something was up and pounced on our team as they were running by. We found out the hard way that if you let go of a team of sled dogs they will run forever, like run themselves to death….sounds a little psychotic to me. 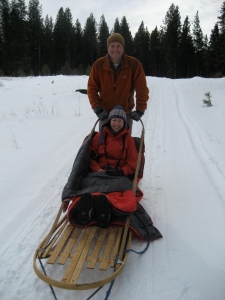 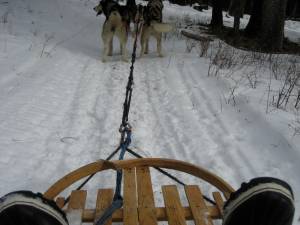 Dented our ride - do you take Geico Insurance?

We caught up to our team on foot, untangled the doggies, hopped back on and were off! We did break the sled though….oops. 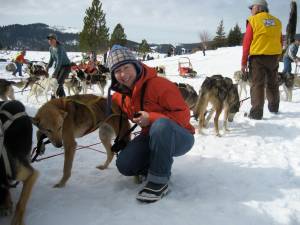 Our lead dog getting some rubs, which is only allowed after they are done running

All and all it was a great time, a great group of doggies and a memorable Valentine’s day.

P.S. I would be remiss if Blue didn’t make it into this doggy-centric post. 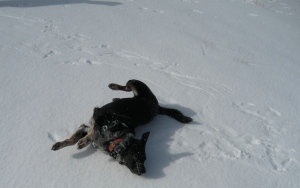