Temper Tantrums and NO!

Oh the terrible twos! How did they creep up on us 10 months early? Josie has really embraced her new title of “toddler” by zooming everywhere, getting into mischief and asserting her will. That last part is a gentle way of saying that she throws temper tantrums and repeats NO! over and over and over…. I have been told by seasoned parents to get used to it, you have 17+ more years of NO! I should add that 99% of the time Josie is a doll, this post is about the other 1%. 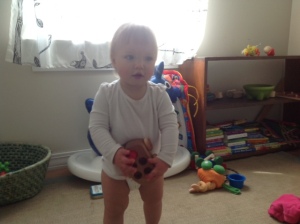 I dare you to try and take away my wooden Prius…

I never put myself in the shoes of that mom in Target whose kid is writhing on the floor because she took away (insert ANYTHING here) or said no to something – that will never be me, right? I think I might be that mom with the child who has “strong feelings” as we are calling them. Josie’s highs are fun, exuberant, happy, joyful and silly and her lows are red-faced rage, tears and hitting (eek!). Matt and I went out and bought a library of books to try to figure out what to do with a 14-months old who has spirit coming out the ying-yang. We consider ourselves pretty laid back people, but the reality is that Josie gets this from someone…probably Matt (;

Instead of describing the drama queen in action, I figured you could watch it for yourself. Note to viewer, no people or animals were harmed in the making of this video…unless you ask Josie, this may have hurt her pride and her ability to draw all over the walls…again.

Our pediatrician put it best, “all you have to do is figure out how to channel all that energy into good and she will do amazing things.” Is there a book for that?

Tagged as no, tantrum, temper

3 responses to “Temper Tantrums and NO!”