When you picture your baby you don’t ever think that you are going to have that kid, the boogery kid. It turns out that Josie is that kid, the one with snot running down her face. Here is a mixture of food, boogers and gums! 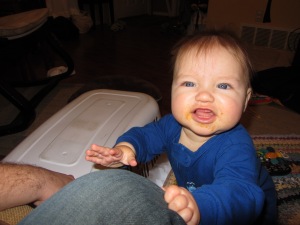 She has also been named “Josie the bulldozer” by the ladies who work at our daycare. Apparently, she bulldozes over all the other kids (especially the ones that can’t defend themselves) to get where she wants to go, including pulling pacifiers out of unsuspecting mouths and tossing them over her shoulder. I can’t help but be a little bit proud, and horrified, at her mobility and coordination. The bright side is that she does it all with a toothless grin. Will this booger bulldozer change her ways? Or are we going to start getting notes home about our bruiser….only time will tell.

We just returned from sunny San Fran where we spent some quality time with our red-headed nephews and their parents. It was a total blast (exhausting) watching the wee ones roll, crawl and run around.

The most impossible picture ever – Henry was over it

Naps on the plane

The Black Pack had a BALL while we were gone. They were watched by several eager and dog loving friends who let them break all the rules – face licking, bed hogging, baby-gate-jumping….they were sad to see us come home. We are not totally terrible parents, Blue was spoiled with a new memory foam bed for her old bones and she has never slept better!