It’s been a rough week for Wade. Actually, he probably thinks he had an awesome week, it’s Matt and I that have had to clean out shoes, pick up trash and chase a dog through a very un-dog-friendly place…. Let’s start at the beginning.

Wade loves to chew, chew, chew. His favorite chew is an orange rubber ball that he is not able to destroy, but that does not stop him from spending hours every night trying. He prefers to chew on said ball while on top of shoes. If there are no shoes around he settles for slobber chewing on clean clothing, furniture or bags. 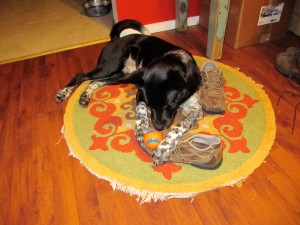 Gooey chew on a shoe...eww

Wade also likes to destroy stuffed animals. We smartened up and took a trip to the Goodwill to pick up a few $.99 animals that he could ruin, and ruin he did. Tonight his victim was the white hare. She has only lost an ear and an arm so far, but the night is young…

Wade’s most annoying episode of the week was his discovery of the trash can. We have seen him nose the rim of our “dog proof” can, but never more. This past Thursday, Matt and I came home hours apart to discover a landfill in our kitchen. After the initial disaster, Matt cleaned up and thought turning the can around would solve our problem, Wade found a way around that. We are looking into a bear-proof canister. 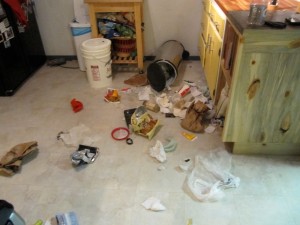 Our last Wade incident was earlier today. We went on a wonderful cross-country ski in the falling snow and neither of the dogs ran away – a success! We stopped at the Orange Street grocery store and as we walked in Matt realized he forgot his wallet in the car. I started shopping and to my surprise Wade came bounding through the sliding doors and bolted past me. I heard the cashier yell at Wade “hey! no dogs allowed!” Yeah lady, he really cares. There was a split second when I considered pretending he wasn’t my dog, but he was racing for the meat isle so I knew I had to act. The chase ensued. I thought I had him cornered a couple of times in the produce section, but he was too fast. I finally tricked him into thinking he was getting a treat and nabbed his collar. I dragged Wade to the door where Matt met me for the bad-dog hand-off with a “don’t ask” face on. Sorry I didn’t get a picture, but I hope I have painted one for you.

One positive for us is that naughtiness is a tiring job, and Wade crashes hard: 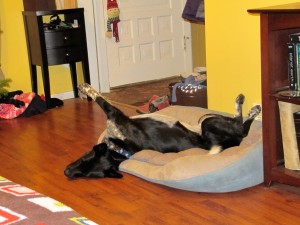 Matt and I have decided that Wade is going through his terrible 2’s (even though he’s 6 months away from being 2). Needless to say, we still love our little pack, even when they challenge our patience. Blue likes when Wade misbehaves because it makes her look like an angel.

I think that Blade is a more apt nickname this week for the pack, if you know what I mean. Matt and I tend to play second fiddle to the dogs, so I thought I could slide a picture of us in here just this once. 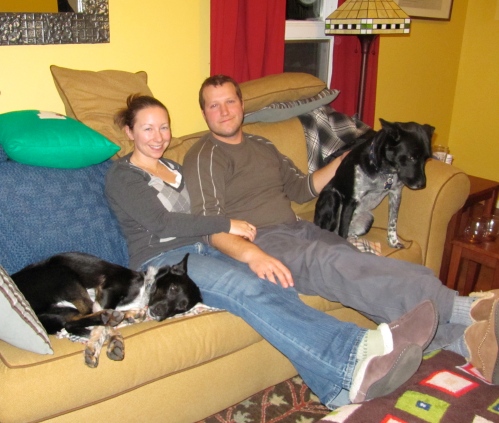 One response to “Wade’s Naughty Week”