Sorry for the delay loyal fans! The new member of the family has been more of a handful then I expected, hence my late blog. Enjoy!

Our family grew by one this past week. His name is Wade and he is Blue’s new brother/lover/enemy (she has not yet decided which). He went through a lot to get here so here goes….

Wade was found wandering the streets of Tucson about 9 months ago. He was micro-chipped so the pound contacted his owner and he told them that he had let Wade go a while back because he didn’t want him. Wade got no interest for adoption at the pound, and was put on the euthanasia list when New Hope Cattle Dog Rescue swooped in and placed him with a great foster mom.

He didn’t look much like a blue heeler or a typical cattle dog, so he didn’t get much interest for adoption….Until I saw him! As you know, Blue is the cutest dog in the world, and Wade looks just like her, so I think he is the cutest dog in the world too. After a month of phone calls, paperwork and sending pictures, I was ready to head to Arizona and get our desert dog. *Full disclosure, it was a work trip turned rescue mission.

My first outing with Wade was to an outdoor dog-friendly bar with his foster mom. He was a very good boy and only stuck his head in a lady’s purse sitting next to us once. 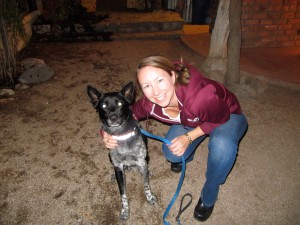 I picked him up the next day and we were off to Phoenix! 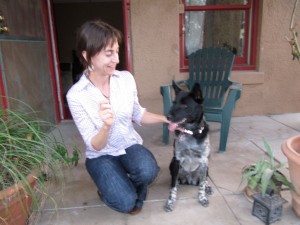 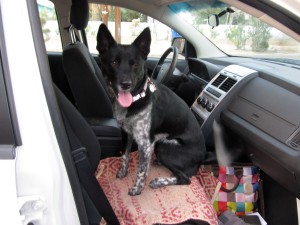 We stayed overnight at the Sleep Inn, which was interesting. Wade had obviously never been invited on a bed before because when I did he jumped up and down and started running around the room and barking. I didn’t feel like getting kicked out of the hotel and sleeping in our rental car, so I decided to keep Wade grounded.

Our flight was at 7:30AM so we were up at 4AM getting ready. Wade was not ready to wake up.

We dropped off the rental car and had to take the bus to the airport. Wade was fine with this arrangement since I was the one pushing him, his massive crate, and all my crap around. 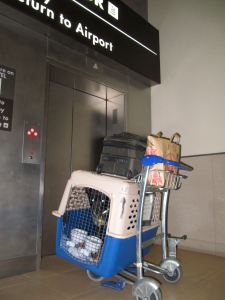 The airport was PACKED on Thursday. We had to go in the special kiosk assistance line to get checked in and it took an hour. The nice Delta lady gave Wade his boarding passes and put stickers all over his crate that he was a live animal, duh. 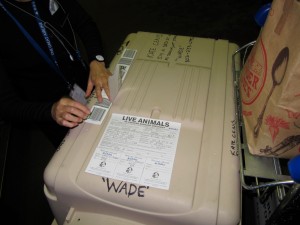 We then wheeled over to security and Wade got to get out for a few minutes while the jolly TSA guy made sure Wade had no bomb building materials in his crate. I mean cattle dogs are smart, but not THAT smart!

Then the sky cap guy came and whisked Wade away. See you on the other side buddy! In the meantime, I went to security and waited for almost an hour in the line… At one point I realized my flight was going to leave in 20 minutes with or without me, so I frantically started cutting everyone. I think I may have even used the line “my dog is on that plane!” once or twice. I was the last person to board and was hugely relieved that Wade was not flying to Missoula (through Salt Lake) alone.

In the end it all worked out and all my worrying about Wade being scarred for life, lost, or freezing to death under the plane were completely unfounded.

Once on the ground in Missoula, he jumped out of his crate, stretched, peed and went to explore this weird white stuff all over the ground. He was so excited to meet Matt – AKA man-with-many-treats. 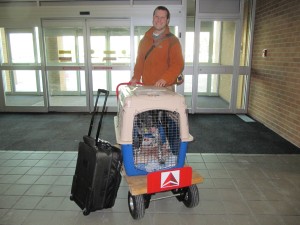 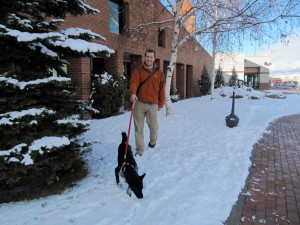 Blue and Wade met on the baseball field near our house, and ignored each other besides a little butt sniffing. When we got home Wade thought it would be fun to steal Blue’s prized orange frisbee out of her mouth and she let him know (with her teeth) that that was not cool. More on the Wade/Blue interaction saga in a later post….. 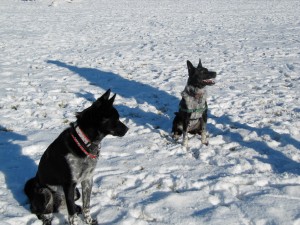 Which McNab is which? 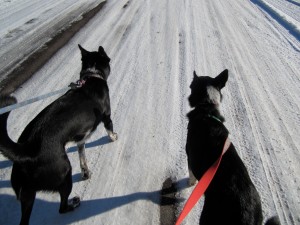 Hmmm, I will give you a hint, Blue is on the right 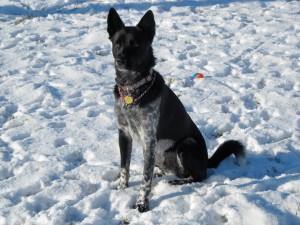 Height: Taller than Blue by a head, to her dismay.

Likes: TOYS, the world is a toy. He also really enjoys destroying his toys.

Hates: Not being able to be in the kitchen all the time. The vacuum.

Sort of hates: Snow. But he is from the desert so we will cut him some slack.

We are off to Bozeman on Wednesday for dog and parent fun. Happy holidays to everyone! Talk to you next year.