Yes, it’s true, my garden has gone feral. Weeding sucks just as much as everyone kept telling me it would, and it seems like something I always intend to do tomorrow. I don’t know what was in the soil before (cow manure?) but I think I have the biggest gosh darn zucchini growing that I have ever seen in my life. I am curious to see how big it gets, Guinness Book of World Records here I come! My corn is about 7 feet tall with at least 2 husks on each stalk and I am about to be buried in tomatoes once they ripen, I stopped counting at 50 little green ones. I have cucumbers, squash, peppers, TONS of lettuce, 2 beets and 2 carrots (they didn’t do so hot with the weed competition). Does anyone know anything about canning? I better learn fast! Here are some pics of my prize winning veggies (self nominated and awarded)…and the remnants of some that I killed. My excuse is the importance of water conservation, but the truth is I’m just a bad, lazy gardener. So is Matt come to think of it. 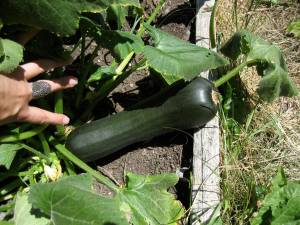 Is that a Jem and the Holograms doll hiding in that husk?

Speaking of feral, I was in Burlington, VT for a bachelorette party this past weekend. We also had a bridal shower, but that was lovely and tame. I’m not trying to ruin anyone’s run for office, including my own, so I will skip the play by play of the night and just post some strategically chosen pictures.

All the ladies before

Some old dude interpretive dancing with the bride 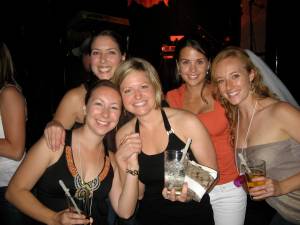 She has the 6AM flight blues

The bride is feelin' the pizza place!

Lastly, would I be a good dog mom if I didn’t add an adorable picture of my girl Bleu? Yup, the name stuck. Once we realized it was the French “Bleu” and not “Blue” we decided it fit our regal gal. She learned how to run next to me on a leash when I was biking this morning and I only had to hit her twice for her to learn not to run in front of me – tough love. She also tried to take off after a squirrel at one point and I had to swerve and ditch the bike. But besides that she was perfect and it poops her out – BONUS.

Bleu resting before her race with my bike

One response to “Gone Feral”